We Are The Folk Goddesses!

In 2010, three of Long Island's favorite singer-songwriters
- Martha Trachtenberg, Judith Zweiman and Hillary Foxsong -
were invited to perform together at a house concert.

Being a mutual admiration society, they eagerly accepted,
and had a great time learning each other's songs.

The concert presenter entitled the evening "The Folk Goddesses"...
and the show sold out!
As they were repeatedly approached by other presenters for more performances, it gradually dawned on them that they had become a group.
As fate would have it, the name was available... and so, our heroines cheerfully accepted the workings of destiny, and became The Folk Goddesses!
Since then, The Folk Goddesses have performed throughout the New York, Long Island, and New Jersey metropolitan areas, and spread their goddess-like wings into New England as well. They can often be found rehearsing in Huntington, NY.

Goddess Martha  is a prolific singer-songwriter-guitarist. She was a founding member of The Buffalo Gals, the first all-woman bluegrass band, followed by a career as a jingle singer in NYC, and has had her songs recorded by such artists as Tony Trishka and Skyline, Missy Raines, Jim Hurst, Kathy Chiavola and Dede Wyland. She performs solo as well as with her husband, musician and producer Tom Griffith, and enjoys being a Goddess.

Goddess Judith  is a singer-songwriter-guitarist, who also plays bass and hand percussion. Over the years, she has performed and recorded as a solo artist as well as with numerous other singer-songwriters throughout NYC and LI. She was part of the Greenwich Village NYC folk music revival of the 1980's and those recording are available on Fast Folk Musical Magazine (now part of Smithsonian-Folkways). She was a founding member of Ell's Kitchen Original Jazz, where she was a recipient of a Meet the Composer grant, and  has been a member of numerous acoustic music groups such as Deb Kayman and Ethnic Routes, Late For Dinner, Folkano, Judith Zweiman & the Answers! and the sea chanty duo, Strike the Bell, to name but a few.  She was both a student and faculty member at the now-legendary Guitar Workshop of Roslyn, where she studied classical guitar and traditional folk music of the British Isles and the United States.  She currently works as a music and multi-media specialist in therapeutic recreation, and has been affiliated as a performer with the NYC non-profit organization, HAI  (Healing Arts Initiative, formerly Hospital Audiences, Inc.) since 1984.

Goddess Hillary is a singer-songwriter-guitarist and percussionist who opted, in lieu of having a mid-life crisis, to embark on a second career as a musician. In addition to The Folk Goddesses, she is one-third of the trio Gathering Time, and her songs have been recorded by both groups. She has a background in graphic design and art and is a gifted photographer. She is married to recording engineer Ted Stoforos. 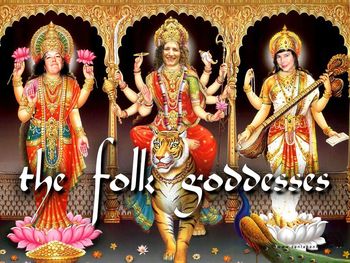 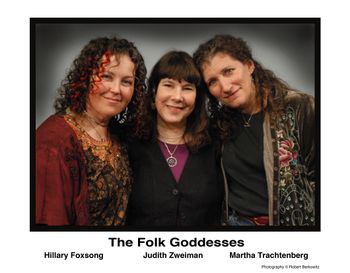 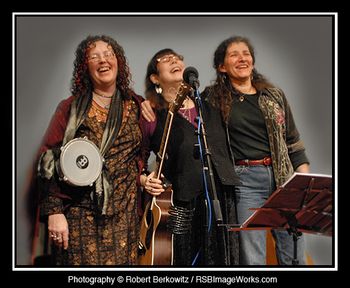 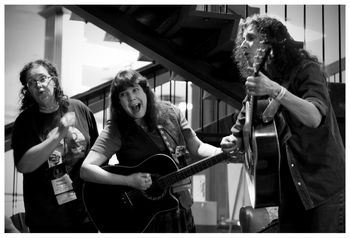